Antoine Geiger’s art and writing explore “the screen as an object of ‘mass subculture,’ alienating the relation to our own body, and more generally to the physical world… It appeases the consciousness, stimulates it, orders it, subjugates it.” 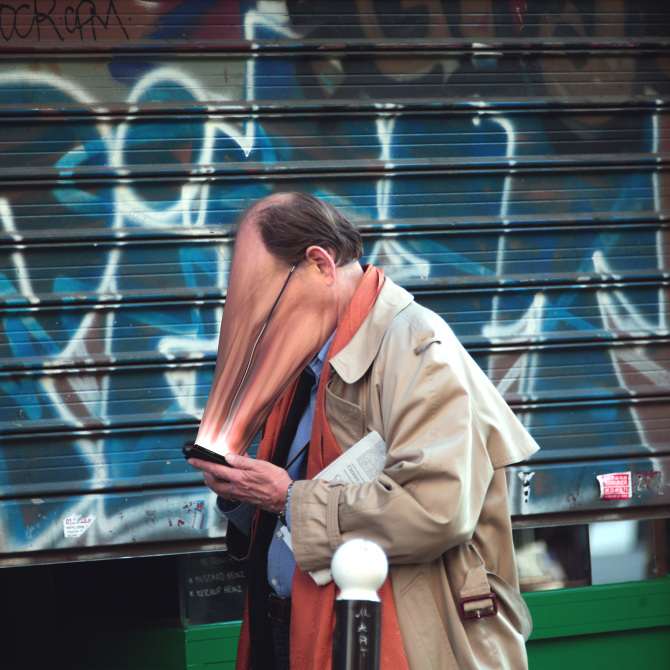 Omniprésent: it’s everywhere. In your pocket, your car, your
appartment, your street.
Omnipotent : it is your best fellow, you give him all your friends, your good feelings and your holiday pictures.
Omniscient : actual swiss knife of the 21st century, without him we’re all lost.

THE ESCAPE :
So we escape.
Even better, we project ourselves.
It’s like in cinemas, and yet it’s talking about you.
We press a button, screen turns on, and it’s like the whole physical world is frozen.
The show can start.
In the end we only escape from ourselves.

The whole SUR-FAKE series is delightful, strange and thought-provoking, and accompanying essay quoted above is just a page and worth reading. This visual artist creates unexpected imagery with words, describing this experience as a “curious ping-pong match with the pixels, terrified like a thick cloud of midges.”

When I was a little girl, I lived for a year in El Salvador. I went to a private school and generally lived a life of privilege. Our house was smaller than the one outside of Boston, and we didn’t have air-conditioning or a fancy compound like other members of the British-American club where we went swimming. My brother and I could go down to the corner store and buy firecrackers, and we would go across the street to a soccer field and find spots in the nearby trees where we could blow up piles of sticks. From there we could see where some folks lived: shacks with no running water, tin roofs, and painfully thin children.

In fifth grade, I’m sure I had no real idea of what was happening, but I knew I had privilege. Things were scary, but I did not fear for myself (although perhaps I should have). The poor would routinely get shot by the police and it was accepted as the way things are. Corruption and bribes were status quo. My home government (the United States) supported the government in El Salvador with arms to defeat the influence of Russian communism, despite no real evidence of that — this was a civil war with casualties on both sides. I remember when the dad of a kid in my class was kidnapped, and the family paid the ransom and the guerillas returned the dad, except his head was in a garbage bag, separated from his body.

I don’t mean to be gruesome, I just think about these things, when I hear about the violence by police in America today. This feels spookily familiar… I’ve been watching things get worse for over three decades. It is a good sign that people can take videos and speak out on twitter and express outrage #AltonSterling #PhilandoCastille #EssenceBowman #BlackLivesMatter

“It’s not what you see that should cause outrage, it’s what you have not seen.” —@shaft calling in Black to work tomorrow

I know for every video and photo there are those who were driving alone or where there were no bystanders with cell-phones.

Digging in the dirt, pulling weeds, planting flowers… these things make me feel at peace. There are some activities in my life that I have discovered are symptoms of happiness. My garden blooms, I write, I do the dishes in the morning, and I take longer walks with my dog.

I don’t know that they actually make me happy. I don’t particularly like to write, it’s a way of thinking through things and connecting with other people in quiet, unexpected ways. Writing makes me just a little uncomfortable, but it helps somehow to send these thoughts outside of my head.

I can’t say I always love gardening. It’s kind of boring, but more interesting than meditation and with some similar positive effects. I like how I feel afterwards, and it makes me happy every time I walk by and see colorful splashes of color and so many shades of green.

These small acts of taking care of myself and being present in my surroundings are indicators. I try to notice when they stop, when the weeds grow wild, when I don’t take time to write and the coffee cups pile up in the sink. Today I noticed that I was gardening and it wasn’t even necessary, and I’ve been taking longer walks in the morning. I still struggle and have doubts and there’s all sorts of awful in the world, but when we go out there to face the world, I think we all need a couple of leading indicators of happiness.